Together Forever by Jody Hedlund is a delightful Christian historical romance. It is the second book in the Orphan Train series but can be read as a stand-alone.

This novel has its roots in the orphan train movement of the mid nineteenth century. A movement set up to resettle New York City’s street orphans. Jody Hedlund has researched thoroughly and combined fact with fiction to produce a fabulous tale.

There is the theme of new beginnings. We can all have a fresh start with God. Sometimes we hold on to the baggage of the past, refusing to believe we are worthy of a second chance. “He needed to trust that God was in control and that He would… loosen the chains that had bound him.”

Sometimes we let our guilt define us. “He’s clung to his guilt for so long he didn’t know that he could let go.” We take a moment in time and if we are not careful, we linger there. God wants to free us from the prison of our own making and give us a new future. Do we trust Him enough to release our guilt and move forward into new life?

God’s love is for all. “No one was too far beyond the reach of God’s love.” There were some poignant moments in the novel where small orphans believe themselves to be unlovable. Words spoken over them remain. We must make sure that we speak life over everyone we meet.

God’s guidelines are to give us a good, healthy way of life. “A lot of people ignore the guidelines He set in place, do it their way instead, and get hurt.” Far from constricting us, God’s way of life brings freedom. “Sinning never accomplished anything worthwhile.” Sin will always weigh us down.

Together Forever is an amusing, light hearted read in spite of the gravity of the situation at times. I loved the characters. They were well drawn and elicited an emotional response from me.

This Orphan Train series is wonderful. It transports the reader to another time and place with detailed descriptions. I was educated as well as enthralled by the action. I can highly recommend it.

I received this book for free from Net Galley. A favourable review was not required and all views expressed are my own. 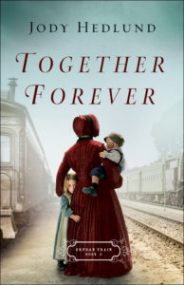 Determined to find her lost younger sister, Marianne Neumann takes a job as a placing agent with the Children’s Aid Society in 1858 New York. She not only hopes to offer children a better life, but prays she’ll be able to discover whether Sophie ended up leaving the city on an orphan train so they can finally be reunited.

Andrew Brady, her fellow agent on her first placing-out trip, is a former schoolteacher who has an easy way with the children, firm but tender and friendly. Underneath his charm and handsome looks, though, seems to linger a grief that won’t go away–and a secret from his past that he keeps hidden.

As the two team up, placing orphans in the small railroad towns of Illinois, they find themselves growing ever closer . . . until a shocking tragedy threatens to upend all their work and change one of their lives forever. 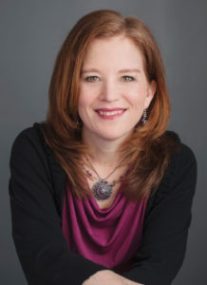 Jody Hedlund is the author of over a dozen novels, including Love Unexpected, Captured by Love, Unending Devotion, The Preacher’s Bride, and A Noble Groom, winner of the 2014 Carol Award for historical romance. She received a bachelor’s degree from Taylor University and a master’s from the University of Wisconsin, both in social work. She lives in Michigan with her husband and five children. She loves hearing from readers on Facebook and on her blog at

Imagine a city where 30,000 abandoned and homeless children live on the streets.

Sounds like something from a futuristic dystopian novel, doesn’t it? Or something that might happen after a war or apocalypse or major disaster, right?

This exact thing actually happened in the 1850’s. And the city was New York City.

It’s hard to believe, but an estimated 30,000 homeless children roamed the dirty city streets and alleys of New York City.

Historians look back on that time and try to make sense what led to such horrific conditions for children. Of course, the influx of immigrants was at an all time high. Jobs and housing were scarce. Diseases were rampant. Hunger and poverty became a norm. 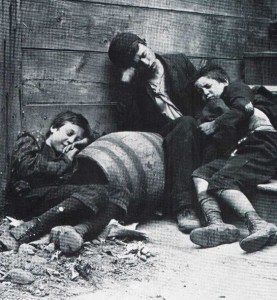 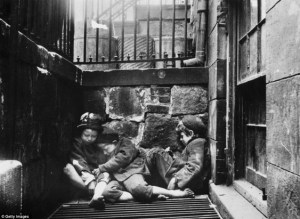 As more and more people became aware of the enormous problem within the crowded slums,  courageous heroes rose up and attempted to do their part to make a difference.

While we may not always agree with the methods that were used to save the thousands of homeless children, we can admire the men and women who could no longer sit idly by.

The Children’s Aid Society was started by Charles Loring Brace as one such attempt to help the hordes of homeless children. His “Emigration Plan” is better known today by the term “Orphan Trains.” 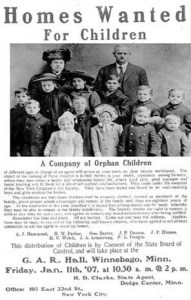 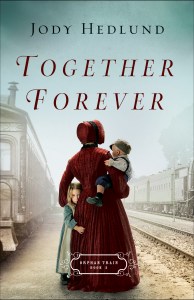 My latest series tackles various elements of the orphan train movement. Together Forever releasing in May, highlights the placing agents, those devoted people who rode the trains with the orphans. The agents spent weeks and months on the road caring for the children, all the while trying to place them in loving homes.

(If you’d like to try out the series, start with my FREE novella, An Awakened Heart.)

Like the brave men and women who came before us, may we always strive to do our part to make a difference!

4 thoughts on “Together Forever by Jody Hedlund”